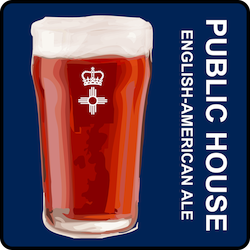 OG 10°P / IBU 24 / ABV 4.0
The term Agricola is much more than that of ager meaning field in combination with cola meaning tiller or cultivator. The more important connection lies between Britannia and Gnaeus Julius Agricola, the Italo-Gallic Roman General responsible for much of Britain’s conquest …

OG 1.050 / IBU 41 / ABV 4.9
Sir Stanley Matthews, the only footballer to be knighted while still playing, the Wizard of Dribble, winner of the first Ballon D’Or, a corporal in the RAF, a true gentleman of the game who…

OG 1.059 / IBU 56 / ABV 5.75
Given our beers were recently consigned to export containers and maiden voyages, We revisited this historical export style, and brewed an IPA with a modern English hop profile. Not widely used in these Colonies – UK Target, Progress and Challenger hops help impart an herbaceous spiciness and earthiness to The Maiden.

R&D Best Bitter      OG 1.047 / IBU 35 / ABV 5.0 A pub classic for generations, this venerable style is quite literally everything one should expect when hearing the word Beer. It is grain forward with just the right touch of bitterness. But let not the name...

OG 1.059 / IBU 36 / ABV 5.8
One of our darkest and most delicious brews has a stockpile of rich flavors ranging from raspberries to toffee to caramel, chocolate and espresso. Brandish your glass proudly…