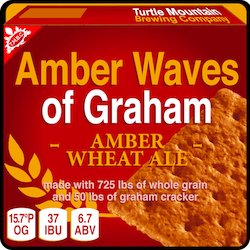 OG 1.054 / BU 22 / ABV 5.6
American Amber Ales are noted for having a mutually supportive cast of hops and malt and Okú Amber is no exception. Bright amber colors fill the pint glass as Okú is poured. A nose of light malt sweetness with light spicy rye notes are carefully balanced with soft floral and earthy hop aromas…